Reviewing the use of Checkpoint in revision parotidectomy 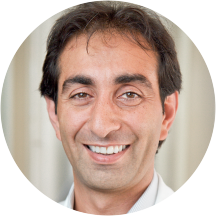 Injury to the facial nerve (main trunk or branches) during parotidectomy is quite common. Indeed, the incidence of transient dysfunction following parotidectomy is as high as 65%, [1] with permanent paralysis present in up to 5% of cases. [2-4] The emotional impact to the patient in the latter case is significant. The main risk factors for intraoperative facial nerve injury are revision surgery, high specimen volume, and chronic inflammation. [5]

About twenty percent of the approximately 100 parotid tumor patients referred into my practice annually present for a revision parotidectomy. As such, I need a reliable and easy to use intraoperative stimulator that is capable of stimulating through dense scar. I have found the Checkpoint stimulator/locator helpful in such cases.

A patient was recently referred to my practice after having undergone partial parotidectomy. The initial surgery was undertaken assuming that the mobile tumor was benign, without prior needle biopsy or further confirmation that the tumor was malignant. The tumor completely engulfed the upper division of the facial nerve.

A frozen section confirmed malignancy and the prior surgeon attempted to separate the tumor from nerve. The procedure was aborted due to the complexity of the case and upon realizing that nerve-related surgical risks were not adequately discussed with the patient prior to surgery. The patient was presented to a specialist who recommended re-operation with complete dissection of the nerve. It was at this point, two months post-operatively,
that I first consulted with the patient.

According to patient report, motor function related to the facial nerve remained normal for approximately 7 weeks after the primary surgery, at which point she became unable to move her upper eyelid.

One lymph node involved in the tumor had been identified during the earlier surgery. An MRI was ordered to assess the extent of lymph involvement in the neck, which appeared enlarged. The MRI results guided the surgical approach, which included neck dissection in addition to resection of the parotid tumor.

Scar from the previous surgery was extensive, beginning at the exit point of the tumor from the skull base. The main tumor had completely invaded the upper division of the facial nerve (the zygomatico-temporal branch) which was also encased in scar tissue. Dissection of the tumor ensued over the next two hours using Checkpoint to help delineate nerve from scar tissue.

The biphasic output of the Checkpoint stimulator was useful in helping us to activate and delineate the various divisions and branches of the facial nerve from among the scar and tumor. The flexibility and ease of use of the Checkpoint stimulator allowed me to complete the case in what I believe was significantly less time and with less stress than what it would have been if I had used the stimulator inherent within the nerve monitoring system.

All stimulation settings were easily adjusted within the sterile field. Since the output of the stimulator is biphasic we were able to generate tetanic contractions of the facial muscles innervated by each of the nerve branches being assessed. Eventually the stimulator would be used to identify and preserve the hypoglossal and spinal accessory nerves, as well.

A relatively high current output of 2mA and 100 microseconds enabled us to stimulate through the high resistance of the scar tissue. As the distance to the nerve branch was reduced with subsequent dissection, the energy delivered could be reduced to 0.5mA to foster even greater precision as to nerve location within the scar or tumor.

Following extensive dissection, a clear network of freefloating, de-vascularized nerves was developed. The lower division nerves appeared to be functioning normally by two days after surgery without appreciable fatigue. This finding was quite unusual as longer periods of time to recover nerve function are more typical in my experience. The upper division nerves, having already been invaded by tumor, performed as expected. The upper division nerves did remain sensitive to stimulation by Checkpoint throughout the entire case giving us the information we needed to perform the surgery, as well as significant hope that function may be restored as the nerve branches are revascularized over time.

The patient was started on a course of concomitant radiation and chemotherapy over the ensuing 6 weeks.

There is potential for wide application of the Checkpoint stimulator/locator in head and neck surgery especially in cases where the nerve is encased in scar tissue or involved in the tumor. In addition to its reliability, I particularly appreciate the ease of use of the device and its ability to penetrate dense tissue.

The Checkpoint Stimulator is a single-use, sterile device intended to provide electrical stimulation of exposed motor nerves or muscle tissue to locate and identify nerves and to test nerve and muscle excitability. Do not use the Checkpoint Stimulator when paralyzing anesthetic agents are in effect, as an absent or inconsistent response to stimulation may result in an inaccurate assessment of nerve and muscle function.